rupert encinas (tohono o'odham)​
Rupert, Flying Eagle, comes from a long line of traditional medicine people.  He grew up knowing his first language and his tribe's traditional ways.  He is a spiritual leader of his tribe near Tucson, Arizona.  He has led revitalization in the tribal schools through their non-profit organization, "Children First--A'al We Pek".  Rupert teaches them traditional protocol, including sweat lodge ceremonies that are meant to purify and to simulate a healthy family structure.  His work includes teaching tribal language and culture, and providing counseling on alcohol and drug prevention.  He is a Sundancer, a Native American Church roadman, a sweat lodge ceremonial water pourer, and a traditional healer.  Rupert has led indigenous wellness workshops across the United States, in Great Britan, Estonia, and other parts of Europe.
reuben iron horse-kent ( Iowa tribe of ks & ne)
Reuben's emphasis is on the Birdman" tablet discovered in 1971 that presents the 'above and below' concept which was central to Cahokia culture. Reuben explores the Cahokia Mounds as a foundation for Midwestern and Oeota descendants of the plains/prairie/woodlands peoples, their cultures, and languages.  He traces the Cahokia influences to the present day artwork of the Iowa Tribe of NE Kansas and SE Nebraska.  ​
PAULINE SHARP (kaw)

Della recently retired after 17 years as a Supervisor of Family Therapy with emphasis on 'Youth at Risk'. She worked with hundreds of families, including many Native families. Today, Flies High is a grandmother and founder of Tiospaye, which means the making of relatives. She is a founder with her two daughters of a transformational and leadership non-profit company, which has been a big learning experience. Della continues to learn, to grow and to teach about our Panchamoma and the Feminine Principle in harmony with the Masculine. ​
ARTHUR SHORT BULL (OGLALA LAKOTA)​

Elders Who Have Passed 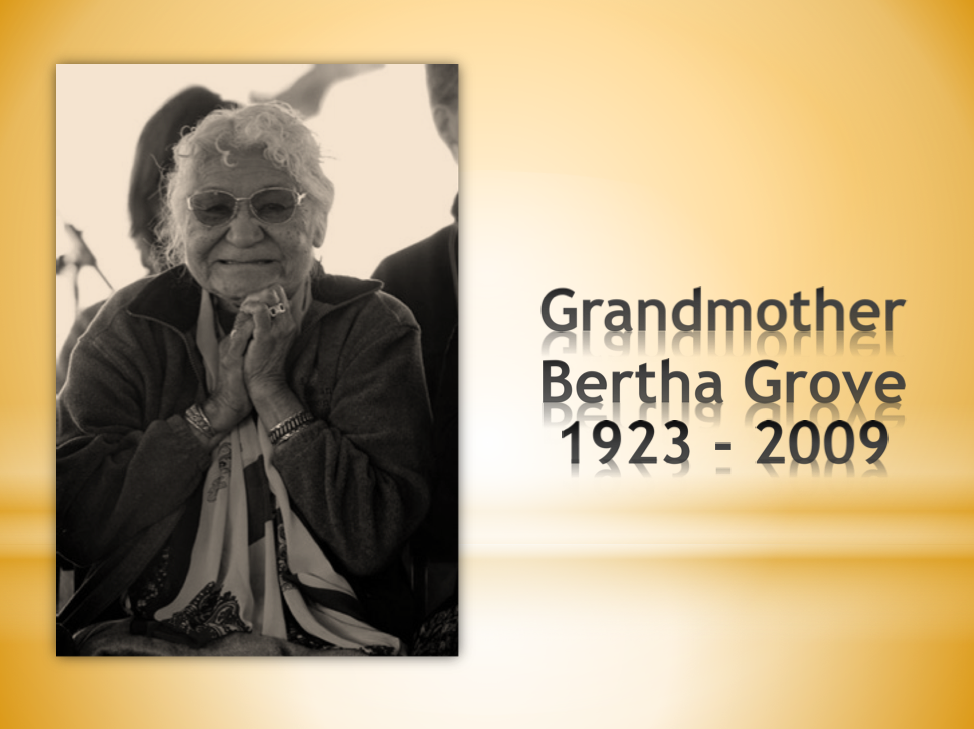 Bertha Marie Burch Grove was born to Samuel Burch and Clara Cloud Burch May 27, 1923, in Ignacio, Colorado. She worked for the Bureau of Indian Affairs, the Pino Nuche Restaurant and served on various tribal committees. She enjoyed traveling and had toured Korea, Australia and other parts of the world. She was the first Southern Ute Tribal Royalty. She participated in horse racing, Sun Dance, pow-wows and other Native American dance cultures. She was a member of the Native American Church. She raised numerous children in addition to her sons, nieces and nephews.

She was involved in community affairs and also found time to educated the general public about Native American traditions and issues of sovereignty and Native rights.

She was tireless in her work for the welfare of her Southern Ute people and all people, and Mother Earth.

Grandmother Bertha had a dazzling way of expressing what she knew people ought to be doing, how we ought to be treating each other and the world.

Then she would launch into her teaching.

Today I’m gonna tell you about the giveaway.

What about all that food that you eat two, three, maybe more times every day. That food is a gift from the plants and animals, and it all comes from Creator. You can’t make it. Breakfast, lunch, dinner, maybe a snack, all gifts.

​Why can’t you learn to give away?

So when you see the gifts of air to breathe, water to drink, and all the food you eat so you can live a good life, maybe you can see something that you can do to help someone else out. Give back something to help Creator out. All those gifts showered on you, you can give your neighbor a ride to the grocery or take ‘em a casserole when they’re sick. And do things so that nobody knows who did it. Give back to the degree that you’ve been given all that you need to live a good life. That’s the giveaway.
Bear Heart, (Muskogee Creek/Citizen Band Potawatomi)
Wallace "Mad Bear" Anderson (Tuscarora)
Grandfather Ted Williams (Tuscarora)
Grandfather Lloyd Elm "New House" (Onondaga)
Grandmother Sarah Smith (Mohawk)
Jake Swamp (Mohawk​)
​grandmother DONNA JOSEPH (LAKOTA)
grandfather ALDEN NARANJO (SOUTHERN UTE)
grandfather CURTIS KEKAHBAH  (KANZA/KAW)
Julia Brownwolf (Lakota)
Flint Hills Wisdom Keepers